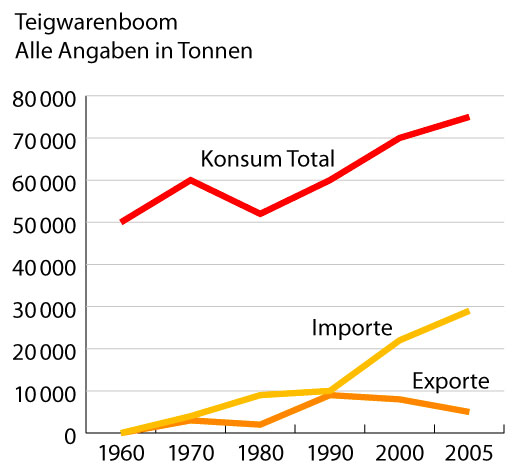 (All Values in tons)

The History of Pasta

To this day it remains a secret whether pasta was invented by the Japanese, Chinese, Romans or Arabs. What is interesting, though, is how pasta cuisine developed over time. One thing is certain: it is popular everywhere!

History gives us the following information about pasta:
• 3500 BC: Japanese cookbooks mention pasta that can be made from rice flour.
• The recipe of a Chinese cook from the year 3000 BC mentions a soup with ingredients that include a type of «Fideli» what means Vermicelli.
• In Italy, pasta was made known by Marco Polo around the year 1300. But the Etruscans, who experienced a cultural blossoming in Italy between the 7th and 4th century BC, already made pasta. This is confirmed by an inscription on an Etruscan tombstone in Coveter, which is located northwest of Rome. The inscription refers to «lagane» and mentions utensils needed for preparing this early form of pasta.
• Various widespread names for pasta in Italy are Greek in origin. For example, «laganum», meaning noodles, comes from the Greek word «laganom».
• Another indication for the increasing importance of pasta is provided by the mention of a «basket full of macaroni» in a will from the year 1279.

The history of Swiss pasta

In 1731, the Swiss cloister Disentis purchased a «torculum pro formadis maccaronibus», a screw press for the manufacture of macaroni. In 1838, the first Swiss pasta factory was established in Lucerne. The brothers Kaspar and Balthasar Ronca wanted to use water power for manufacturing pasta, so they applied to the Smaller City Council for a building permit for a water wheel. The founding era of the Swiss pasta industry is considered to be the period from 1838 to 1860. Several pasta factories in German-speaking and Western Switzerland were established during this time. It is interesting to note the geographic location of the factories at the time. They are in German-speaking and Western Switzerland. Pasta is not manufactured in the Ticino region in the south. There is no factory established or operated by Italians.

It was, however, the Italians who introduced pasta culture to the Swiss more than a century ago. Many Italian immigrant workers were involved in the construction of the Swiss railway tunnel in the 19th century. Being accustomed to eating pasta, they did not want to do without. This had a direct effect on the demand for pasta. «You can't change the habits of a lifetime» - in Swiss kitchens, pasta was still something of a rarity. The growth of industrialization changed the working world. Women started working in spinning and weaving mills. There was less time for preparing meals. Pasta came at just the right time: It was fast and easy to prepare, tasted good and fit well with almost any dish. The new food was popular.

The number of pasta factories increased continuously. In 1920, Switzerland had 78 pasta factories. The limited transport means at the time fostered the number of local manufacturers. With the expansion of the railway and road network, however, local production became less and less important and the import of pasta grew in importance. Technical developments in the manufacture of pasta and the concentration of the demand resulting from changing organizational structures regarding the detailed food lists caused a further decrease in pasta manufacturers.
Today, pasta is more popular than ever! The per capita consumption in 2005 passed the 10 kg mark. With 10.6 kg per capita, the Swiss are absolutely fanatic about pasta and – after Italy – are one of the largest consumers of pasta in the world. The following graph at the side shows the development is Switzerland during the past few years.

We use cookies on our website. Some of them are essential for the operation of the site, while others help us to improve this site and the user experience (tracking cookies). You can decide for yourself whether you want to allow cookies or not. Please note that if you reject them, you may not be able to use all the functionalities of the site.